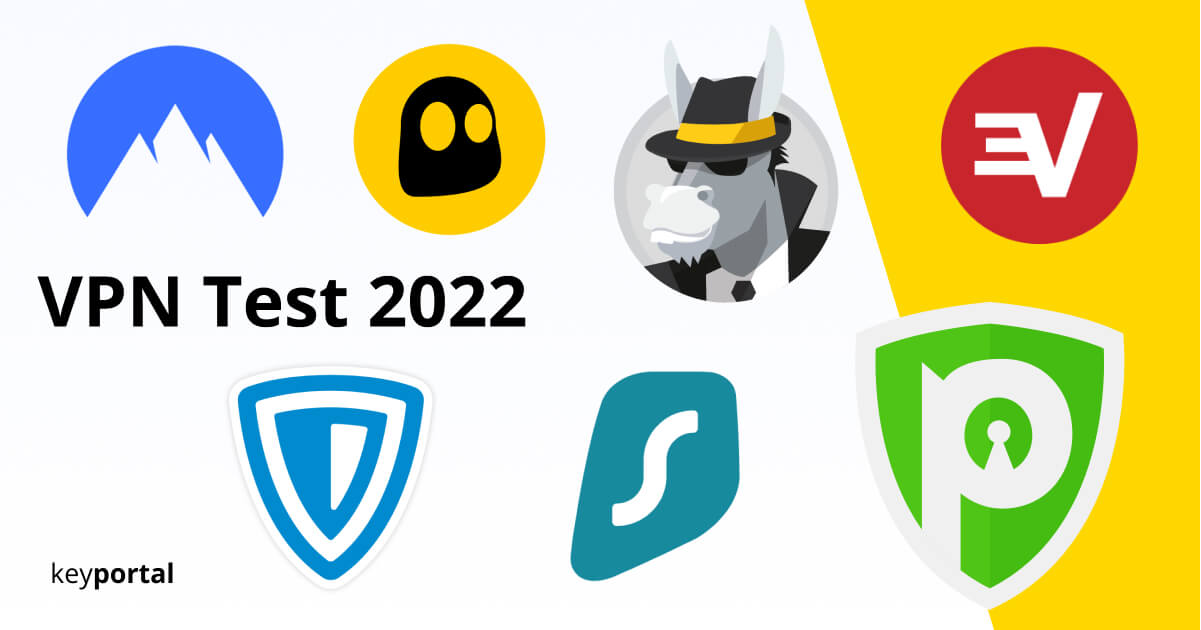 Welcome to our big VPN test 2022, where you will find an overview of the best VPN service around based on the experiences of our experts. Looking for more security on the web? Then take a look at the winners in our VPN comparison!

The world is changing. Even before the outbreak of the Corona pandemic, an increasingly large part of everyday life was taking place online. But how protected can sending data over unencrypted connections really be? Is it so easy to circumvent country blocks and watch Netflix shows from overseas via a VPN? Can you still surf the Internet anonymously today? Absolutely, promises the majority of VPN provider. We agree with that. But only a small number of services are worthwhile for private and professional users alike, offer all the important features, and will receive the necessary support in 2022.

From various recommendations, we have formed our top 7 in this VPN test, taking into account scope as well as price-performance ratio:

If you want to get started right away, you cannot go wrong with any of the brands on this list. All of the best VPN service providers have been on the market for years and prove themselves on millions of devices every day. Every single one of them guarantees state-of-the-art encryption via AES 256 bit, for example, or helps you with clear tutorials on how to get the VPN setup done. Particularly noteworthy would be the winner of our VPN test NordVPN and the German ZenMate. Both prove to be highly reliable in every respect.

For those who would like to know more details, we will now present various benefits of our top 7 in more detail. Let’s start with the detailed VPN comparison:

Top dog NordVPN still convinces all along the line. If you’re a regular Internet user, you’ve probably already noticed the marketing offensive of the VPN with the mountain. Numerous content creators and tech-savvy YouTubers are enthusiastic – and rightly so! In this VPN test, NordVPN stands out from the competition in pretty much all areas. For under $4 a month, you get the front runner in terms of speed, security and transparency. NordVPN has always followed a strict no-log policy in the interest of the end user. Accordingly, no logs of your online activities exist, as an independent audit by PwC Switzerland recently confirmed once again.

To the Offer: NordVPN

Core elements such as advanced features are consistently expanded. Instead of a single VPN tunnel, NordVPN routes all data via Double VPN over two separate servers, so that there is no recognizable connection between the source and destination. Recently, even WireGuard has been available as VPN protocol (among other options), which is very popular among experts. However, the most striking thing is the appealing presentation of the clients. Especially the apps for iOS or Android score with a clarity and user-friendliness that is second to none. On the NordVPN world map, you can select the desired country within a few seconds and enjoy the streaming program there. Activate your NordVPN account now!

(2) HideMyAss! – Second Place for HMA in our VPN Test

What started in 2005 as a leisure project of a sixteen-year-old Englishman, quickly developed into one of the best VPN service providers in the world. HideMyAss! became HMA and was finally acquired by Avast in 2016. At the same time, the company always stuck to its principles: Customers still get the full program at a decent price. Depending on the package you choose, you’ll pay just over $4 per month for HMA. Like NordVPN (and most services in the VPN review), the company with the donkey mascot has a solution for all common operating systems. In addition to Windows PCs and Apple devices, a VPN client for Android or smart TVs, you can also install HMA VPN on current game consoles and numerous routers.

Go to the Offer: HideMyAss!

A detailed VPN comparison reveals that the individual versions differ considerably from each other. While iOS users have to do without various options, HMA continuously improves its Android app. Thanks to split tunneling, for example, it is possible to specify what should run through the secured VPN tunnel. Thus, you can protect important data and use sophisticated online services without losses at the same time. Furthermore, no provider in our VPN test is represented in more nations. In combination with separate streaming servers, this makes HMA VPN very attractive for everyone who values diverse entertainment. With just one click, you establish the right VPN connection via Lightning Connect.

Based on the development that ZenMate has undergone since the VPN was founded in 2013, the trust in the service is increasing enormously. Constantly, the German company expands its offer and adapts to the preferences of its users. Like no other service in our VPN test, ZenMate gained more servers – almost 1,000 new options in the last three months alone. You disliked HMA’s focus on mobile devices? With ZenMate, the classic computer software was able to come up with the most features in comparison. Depending on the system, your VPN client automatically chooses between OpenVPN or IKEv2 protocol. So you have a proven protection in addition to your standard antivirus.

To the Offer: ZenMate Ultimate

ZenMate comes in three different variants. First, there is the free VPN as a one-time browser extension with a maximum speed of 2 MB/s. ZenMate Pro also only runs on Google Chrome, Firefox or Microsoft Edge. However, you unlock almost all of the VPN’s features here. As a company, you can protect your network with a whitelist, for example, and a kill switch checks your VPN connection in the background when you surf privately. Your security is always in the foreground. ZenMate Ultimate is the name of the premium version, which you can set up on any suitable device. The special feature: If you sign a three-year contract right away, you pay less than $2 per month. It could hardly be cheaper.

(4) CyberGhost VPN – Protection for all Cases

CyberGhost is certainly one of the pioneers in our VPN test. The journey started over 15 years ago and this experience stands out. A look at the number of servers shows a constantly growing selection, which puts CyberGhost VPN on the top of the list. In addition, both the app and desktop application impress with their clear structures and ease of use. This philosophy runs through all areas of the network. CyberGhost VPN commits itself to high transparency while not storing any information about its users’ activities. With WireGuard, your VPN connection is reliably established using the latest protocols.

To the Offer: CyberGhost VPN

Another striking feature is the surprisingly inexpensive 1-year package, which costs less than $50 in total. If you opt directly for a three-year term, on the other hand, you will hardly pay more than $2 per month. Alternatively, CyberGhost VPN offers a one-day trial version which has all the features. Both P2P connections and BitTorrents are supported on the most common systems. Thanks to the excellent WiFi protection, you are also safe in public networks, where you can store individual connections. Adblockers and various anti-tracking services can be activated in the settings. CyberGhost VPN also offers a combination of antivirus, privacy guard and security updater for unlimited security.

The fairly young VPN service Surfshark could quickly establish itself in the shark tank due to its impressive bandwidth. The in-house VPN client has always worked on every conceivable platform: from Windows 10 via Apple TV to Linux. You therefore have permanent access to the media libraries of other nations or can watch German-language content from abroad. Netflix streams immediately start in the best quality. In the VPN comparison, only NordVPN proved to be a bit faster. Nevertheless, geo-blocking is not a problem for Surfshark. The integrated no-borders mode hides the VPN tunnel from prying eyes, so no VPN service is visible. A must in countries with authoritarian restrictions.

To the Offer: Surfshark VPN

Other bonuses include the VPN’s free included ad blocker called CleanWeb, which even blocks malicious malware. Together with the foolproof operation, Surfshark thus ensures a high level of security and control. With a price of just over $2 per month (for the 2-year package), the company is one of the cheapest in this VPN test. Included are all additional functions, such as the sophisticated Multi Hop. On pre-programmed routes, Surfshark directs your requests over different countries if necessary to make tracing impossible. Your IP address is never in danger of falling into the wrong hands.

ExpressVPN was long considered an secret tip for tech insiders. However, since its release in 2009, the service has been able to win over a wide audience over the years. In the Asian region (and especially in China), ExpressVPN is one of the top 3 solutions because of its emphasis on keeping customer data private. Unlike other VPN service providers, ExpressVPN even has official proof of the effectiveness of its own DNS servers: Despite complete cooperation, no connection data could be found in a serious crime case at the beginning of 2018. Neither ExpressVPN itself nor the investigation committee found any evidence of existing communication. Accordingly, the VPN client scores well in the check for leaks during the VPN test.

Go to the Offer: ExpressVPN

Additional features are a bit rarer than with our test winners, but they all serve an important purpose. Perfect Forward Secrecy, for example, helps especially with sustained use. ExpressVPN generates a new key for your VPN tunnel after one hour at the latest. In addition, the network also relies on its own brands for protocols, such as Lightway, which is supposed to guarantee blazing-fast connections. Turbo VPN comparison is the keyword. However, you pay a slight surcharge for such protection, which is the main reason for this placement. Even in the cheapest 1-year package, ExpressVPN costs over $7 per month and thus positions itself as a premium product. The surcharge is well worth it.

New to the program but already on the market since 2007 is PureVPN. The VPN provider has been able to expand its offer considerably during the last few years and is now especially suitable for advanced users. When logging in, you decide yourself (or the system decides automatically) what purpose the VPN connection should serve. PureVPN offers streaming, free surfing, anonymity and secure sharing. The VPN client is convincing in all these areas. Criticisms, such as problems watching Netflix via the VPN service, are no longer confirmed nowadays. Rather, dedicated streaming servers are now available that unlock popular media libraries worldwide.

To the Offer: PureVPN

Deductions in the B grade are then nevertheless made for the average speeds. Here the high bandwidth of servers becomes a small disadvantage. In terms of features, however, the quality is excellent again. No-log policy, split tunneling, WiFi protection – PureVPN does not let itself be deprived of what the competition can do. In addition, there are various packages, all of which invite you to try them out with a 31-day money-back guarantee. For just over $3 per month, you can use PureVPN as an app or software. In the VPN comparison, you are on the cheap side. In addition, there are various add-ons that round off the offer. With port forwarding and a unique IP address, you remain completely anonymous.

Want Background Info? We Explain how a VPN works!

These are the results from our VPN test 2022. Between quality and quantity, you will find the best VPN service for every budget. When making your decision, keep in mind that our Top 7 only includes the crème de la crème of our VPN comparison. In any case, you’ll get a tried and tested software that ensures more security and privacy on the net. If you want to improve your setup in other ways too, we recommend a current version of Microsoft Office. You are already well equipped.